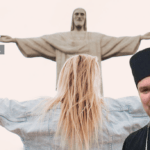 I Perceive That You Are A Prophet

“I perceive that You are a prophet” When The Word Comes To Us | By Deacon Daniel Malyon.

This Sunday the Church commemorates the Sunday of the Samaritan woman. This reading is one which I am becoming increasingly familiar with and growing in my appreciation of, having discussed it at a Diocesan retreat. The reason for this is that the encounter epitomises the Christian call to Evangelism in many ways, both in terms of the approach taken by our Lord, and the response taken by the Samaritan woman. And indeed, the experience of God is an encounter, as we will see as we explore the context of our Lord’s conversation with the Samaritan woman.

The Prophet | The Samaritan

In order to explore these various layers of understanding, we need to understand the context of this encounter. Firstly, unlike most of the encounters between Christ and those outside f the mainstream Jewish community, this happens outside of a heavily Jewish area, meaning that even by cultural osmosis there would be no influence of second temple Judaism in the woman’s mind.

As a Samaritan, this woman would also take issue with Christ coming to her as a Messiah preaching the salvation of the Jews, being from the ostracised Samaritan community, expressing again the uniqueness of Christ’s words to her.

In short, this is an encounter with someone whose worldview and situation is entirely different to any other, and though every encounter with God is a unique and individual encounter, this one appears in a context outside of the realms of the Jewish sphere, as we will see when we look at Christ’s words throughout this.

The Prophet | The Words

Looking into Christ’s words in this encounter, we begin with the words in which Christ opens up the conversation, he says “Give Me a drink.” (John 4:7). Unlike his other individual discussions with those around, his words are not about a specific challenge they are facing, nor regarding the forgiveness of sins, nor the promise of Salvation, but asking for a drink of water from her. This allows for her to give her preconceptions regarding his character, revealing that she simply recognised him as a Jewish man.

St Cyril speaks of this in his commentaries on John he expresses how, “The woman imagines nothing more than what she is accustomed to; and by no means understands the force of what is said.” This emphasises the significance of this approach, since she is engaging in a discussion regarding the coming of the Messiah and yet is approached in this simplistic way, and in her own sphere of understanding.

“If you knew the gift of God, and who it is who says to you, ‘Give Me a drink,’ you would have asked Him, and He would have given you living water.” [John 4:10] When The Word Comes To Us | I Perceive That You Are A Prophet.

The Prophet | The Gift

The dialogue continues in this manner, with the discussion never taking on the tones of reflection on those texts not used by the Samaritans, such as the Ketuvim and Nevi’im, but purely discussing the well and authority of Jacob, using the water as a metaphor for the salvation of herself and others.

Even when Christ says, “If you knew the gift of God, and who it is who says to you, ‘Give Me a drink,’ you would have asked Him, and He would have given you living water.” (John 4:10) the woman almost brushes this aside, relying on her preconceptions of greatness, such as the authority of Jacob. Yet Christ still does not force new ideas upon her but allows her to grow in her perception.

The Prophet | The Promise

When the discussion finally gets onto worship and the promises of Salvation, Christ again does not go on to address it in the Jewish manner, but focuses on the universal aspect of the message. We see this when the woman recognises Christ’s prophetic message and confronts him as a Jewish prophet, drawing once more from her own cultural experience of the time and saying, “our fathers worshiped on this mountain, and you Jews say that in Jerusalem is the place where one ought to worship.” (John 4:20)

It is important to note that she means to ill intent here, however from a Samaritan perspective she is simply trying to understand the message he is giving and its relationship with those beliefs which per people hold based upon the Torah and their tradition.

“If you knew the gift of God, and who it is who says to you, ‘Give Me a drink,’ you would have asked Him, and He would have given you living water.” [John 4:10] When The Word Comes To Us | I Perceive That You Are A Prophet.

However it is Christ’s response to this which is of great interest, and a true demonstration of how every encounter with Christ is unique. He states, “You worship what you do not know; we know what we worship, for salvation is of the Jews. But the hour is coming, and now is, when the true worshipers will worship the Father in spirit and truth; for the Father is seeking such to worship Him.” (John 4:22-23).

If we compare this to his words to the Pharisees, “destroy this temple, and in three days I will raise it up.” (John 2:19). In both of these encounters he is speaking of the same thing; the universal message of Salvation through Christ and the worship of God in the spirit. Yet he approaches it to the Samaritan woman as a negation of both aspects of physical worship on the mountain and temple.

Yet to the Pharisees it is expressed as his body and resurrection as a new temple. This is a vital message for Christians in any dialogue, that if we cannot teach the faith a relevant way then we cannot teach it in fullness at all. When Christ does this, the woman finally speaks of his words being a Messianic promise, and Christ confirms, ““I who speak to you am He.” (John 4:26)

The Prophet | The Recognition

It is this fullness of his teaching in her context that we see the impact of this personal encounter. Instead of taking the water, she leaves the bucket and goes to the city to tell the men, “Come, see a Man who told me all things that I ever did. Could this be the Christ?” (John 4:29). St John Chrysostom sees her response as one of the most admirable, noting how, “so kindled was she by His words, that she left her water pot and the purpose for which she came, ran into the city, and drew all the people to Jesus.”

She was so transformed by this encounter with Christ that she was not ashamed of her past transgressions of which Christ spoke, but was entirely dedicated to calling those around to him that they may witness him also. This is the true impact of an encounter with Christ, and the true impact of an evangelism based on condescension and relationship building.

“If we are not fully changed by this encounter then these words have fallen on deaf ears.” By Deacon Daniel Malyon | I Perceive That You Are A Prophet.

From Christ’s example in this we can recognise how we are both called to speak of our love of Christ, and to respond to his call. If our words are not build on an encounter with the person and a recognition of their needs and understanding then we are speaking meaninglessly. Similarly for those who have witnessed Christ and his love, if we are not fully changed by this encounter then these words have fallen on deaf ears.

In this way, as we continue our journey through Lent, we should ensure that every word we speak of our Lord is done so with love and compassion, and that those words we hear are heeded and incorporated into our very being.

I Perceive That You Are A Prophet