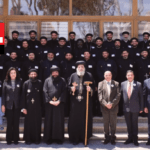 APRIL 12: H.H. the Pope Delivers Lecture to 19 Priests on Church Administration at Logos

The Coptic Institute for Ecclesiastical Administration and Development (COPTICAD) began its Course specialized in Church Administration and Strategic-Planning, taken by 19 priests ordained by H.H. Pope Tawadros II a month ago, to serve in churches throughout Cairo, Alexandria, Luxor, Africa and the United States of America – yesterday, at the Logos Centre, papal residence in the Monastery of Saint Pishoy in Wadi El-Natrun.

Started April 12, Professors at the Institute, led by the dean Dr. Magdy Latif, also joined in inaugurating the event and workshop sessions, which began yesterday and will continue until April 17.

Due to the importance of these sessions, several similar ones also took places among different groups of monks and priests, with the aim of enhancing pastoral and administrative work in service of the Coptic Church, after the course was taken by seven new bishops (before their consecration to the episcopal ranks this past March), and groups of priests ordained in the past few years.

APRIL 12: H.H. the Pope Meets with Priests of El-Obour City

On Monday evening, H.H. Pope Tawadros II held a meeting with priests of the Churches of El-Obour, in the presence of the monk Fr. Heg. Raphael St. Pishoy, Papal Vicar in El-Obour, where he gave a spiritual word on ‘teamwork and overcoming negativities that may hamper them.’

He also discussed with them the coordination of the responsibilities of service among them, the setting up of a monthly meeting dedicated to a spiritual, administrative, and financial follow-up, and the growing pastoral needs of the coming future – especially as the city is in constant growth due to the developmental efforts and achievements undertaken by the state throughout the land of Egypt.

Reported by Michael Daoud. Delivered to you by COPTICNN™ | Coptic News Network on 2021-04-12 from Toronto. Canada

0 0 0
Previous : You Must Be Born Again! The Anabaptists [Part 2]
Next : Taste The Presence
Michael Daoud