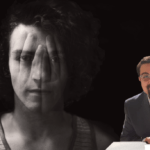 Previously, we looked at depression in the Bible specifically. Besides depression, Biblical characters suffered from other mental health-related issues. Some of these issues were fleshly lust, anxiousness and distrust. In this article, we will take a closer look at the second issues “Anxiousness In The Bible”.

“Martha, Martha, you are worried and troubled about many things. But one thing is needed, and Mary has chosen that good part, which will not be taken away from her” [Luke 10:41-42] Anxiousness | Different mental health issues in the Bible

Anxiousness In The Bible | Martha

Martha and her sister Mary were visited by Christ, and this story is mentioned in the Gospel of Luke the Apostle (Luke 10:38-42). The two sisters acted completely the opposite; Martha was working hard to make sure that everything was perfect, whereas Mary was sitting quietly next to Christ. The story of Martha and Mary is quite a small one, nevertheless, it teaches a significant and valuable lesson. Based on the story a situation can be visualized, where Martha happily and excitedly welcomed Christ to her house.

Numerous people were wanting Christ to enter their house, and Martha was one of them. Once Christ entered, she started to feel anxious, as she maybe didn’t expect Christ to enter her house and therefore she was unprepared. Therefore Martha started to feel pressure and felt the need to prepare her house on the spot. Like most people in such situations, Martha couldn’t think straight due to anxiety and stress. When people are not capable to think straight their head starts to feel like as if it’s going to explode.

“tell her to help me” [Luke 10:40] Anxiousness | Different mental health issues in the Bible

This was also the case for Martha, where she became ‘’distracted with much serving” (Luke 10:40). Blinded by her anxiety, she started to attack her sister for letting her do all the work by herself. Martha approached Christ, asking Him to “tell her to help me” (Luke 10:40). Anybody, not only Christ, would sense Martha’s stress level. Without people explicitly telling, their stress and anxiety can be sensed. Christ, sensing Martha’s anxiety, went on to calm her and said: “Martha, Martha, you are worried and troubled about many things.

But one thing is needed, and Mary has chosen that good part, which will not be taken away from her” (Luke 10:41-42). Martha was probably expecting Christ to tell Mary to help her, but on the contrary; Christ told Martha to calm down. Hereby Christ taught Martha a valuable lesson, namely that she shouldn’t worry about unimportant things. In addition, Christ taught Martha to focus on the things which are only temporary (i.e. being with Christ) instead of focusing on things which are neither priority nor of importance.

“which of you by worrying can add one cubit to his stature?” [Matthew 6:27] Anxiousness | Different mental health issues in the Bible

Christ, as it were, told Martha to focus on things that happen scarcely, such as spending time with the Incarnated God. Other things, such as chores, are not only endless but can also be done at any given time. So, Martha could do chores at any time whenever she wanted, however, this wasn’t the case with spending time with Christ. Christ had taught this lesson elsewhere as well, namely in the Gospel of Matthew (Matthew 6:25-34).

As people tend to worry about many things, Christ taught the people a general lesson on worrying. Worrying stems from the idea that one is the director of his own life, and that if he doesn’t take chances they will never return. This is, however, not a Christian way of thinking. Of course, we have to put effort and work into our goals and dreams, and not sit passively waiting for our dreams to come true by themselves.

The difference lies in the idea that we on ourselves are not the ultimate director of our lives, as can be illustrated by numerous examples from the Bible. Christ taught us a valuable lessen through asking a critical question: “which of you by worrying can add one cubit to his stature?” (Matthew 6:27).

“your name shall no longer be called Jacob, but Israel; for you have struggled with God and with men, and have prevailed” [Genesis 32:28] Anxiousness | Different mental health issues in the Bible

Anxiousness In The Bible | Jacob

After Jacob stole Esau’s blessing as firstborn (Genesis 27:1-40), Esau ‘’hated Jacob because of the blessing with which his father blessed him’’ (Genesis 27:41). Esau hated Jacob that much that he ‘’said in his heart, ‘the days of mourning for my father are at hand; then I will kill my brother Jacob’’ (Genesis 27:41). Jacob knew about this via Rebekah (Genesis 27:42-43), who advised him to flee in order to prevent further escalation between them (Genesis 27:44-45).

Jacob sent his people in groups, the one after another, to ensure the safety of all because ‘’if Esau comes to the one company and attacks it, then the other company which is left will escape’’ (Genesis 32:7).

“deliver me, I pray, from the hand of my brother, from the hand of Esau; for I fear him, lest he come and attack me and the mother with the children” [Genesis 32:11] Anxiousness | Different mental health issues in the Bible

Jacob was in great distress, and out of his despair, he prayed to God saying ‘’O God of my father Abraham and God of my father Isaac, the Lord who said to me, ‘return to your country and to your family, and I will deal well with you’’ (Genesis 32:9) and ‘’deliver me, I pray, from the hand of my brother, from the hand of Esau; for I fear him, lest he come and attack me and the mother with the children’’ (Genesis 32:11).

Jacob struggled for a great time with anxiousness, and nothing seemed to comfort him. What did help him was his wrestle with God; he refused to leave God without being blessed.

In the next article, we will take a closer look at the “Distrust” issue in the Bible.

Delivered to you by COPTICNN™ | Coptic News Network on 2020-04-13 from Kudelstaart. Netherland.