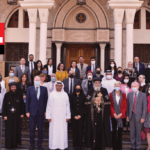 APRIL 15: Launching “She Can” Initiative in Support of Women

Today the Coptic Orthodox Church launched an initiative titled “She Can,” to support struggling girls and women who attained achievements for themselves and their families, The Papal Residence in Cairo, hosted and launched the work of this initiative – to be implemented by the Bishopric for Public, Ecumenical, and Social Services, in collaboration with the Papal Office for Projects.

Pope Tawadros II honoured a group of women whom he described as “Bright Role Models” for their ability to attend literacy classes, persevering until they obtained high qualifications and gained employment in jobs that earned them income to help meet the needs of their families. As well as others who carried out small projects and achieved great success, with the support of the Bishopric for Services and the Papal Library.

This afternoon, the Coptic Orthodox Church released three significant documents related to women and the family. This occurred during a special event held at the Papal Residence in Cairo, in the presence of His Holiness Pope Tawadros II and heads and representatives of Egyptian and international councils and institutions, concerned with the rights of women, the family and children. 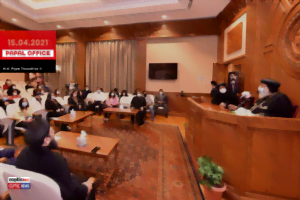 Pope Tawadros News Today | The Papal Report covering April 15, 2021: Launching “She Can” Initiative in Support of Women. By Michael Daoud.

Also present were a number of ambassadors and representatives of Arab and foreign countries, as well as leaders of the Bishopric for Public, Ecumenical, and Social Services and the Papal Office for Projects.

The first document was on the topic of family planning, the second on female circumcision (FGM), while the third dealt with violence against women.

From the Bishopric for Public, Ecumenical, and Social Services: H.G. Bishop Youlyous (Julius), Dr. Hani Riad (Executive Director) and other leaders of the diocese as well as Mrs. Barbara Suleiman, Director of the Papal Office for Projects.

Read: The three declarations that were signed by His Holiness recently concerning Family Planning, Female Genital Mutilation (FGM), and Violence Against Women.

The Papal Office for Projects | “She Can“

The woman has a fundamental and influential role in society, for she is the mother and leader who fitted to raise responsible generations capable of advancing the nation. The woman is the most instrumental in instilling responsibility in her children at a young age.

Throughout history, the Church has supported and emphasized the equality of both genders, stressing the importance of educating girls and prohibiting early marriage. The Church also encourages the woman to occupy influential roles throughout all areas of society to find her as a physician, teacher, engineer, etc., and reaching all fields. Today women have a significant role and are undoubtedly contributing to the building up and development of society.

It gladdens us to see numerous examples of success among women who completed their education. They Begin with the literacy classes offered, achieved high qualifications, and gained jobs that can support their husbands and families with their various essential and non-essential needs, making a decent living accordingly.

Through the Bishopric of Public Services and the Papal Office for Projects, the Coptic Orthodox Church launched the “She Can” initiative, calling upon each woman to complete her education to find a job opportunity suitable to her circumstances.

The prevalence of education and eradication of illiteracy are some of the features that characterize advanced societies. Education informs the awareness of girls and women, allowing them to develop their abilities, which are reflected in their dealings with their children’s proper upbringing, bringing forth well-educated and informed generations capable of advancing society.

Education is reflected in the ability of women to carry out their responsibilities and duties to the fullest extent. It also allows women to achieve financial independence by becoming employed in a job with a monthly income. Education and work also provide women with a social status among other members of society. Education informs women of their rights and duties and thus guarantees them a healthy lifestyle.

We believe that the progress of societies and nations depends heavily on the success of women, women who have received an education and are working; by this, they come to appreciate their worth, which produces a sense of contentment and psychological stability.

Therefore, we invite each woman to diligently seize this opportunity, first by studying and then by empowering themselves through these small projects.

Reported by Michael Daoud. Delivered to you by COPTICNN™ | Coptic News Network on 2021-04-15 from Cairo. Egypt