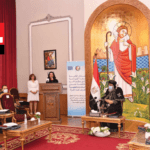 “At the presence of His Holiness and heads and representative of Egyptian and international agencies for the rights of women, families, and children, as well as several ambassadors and representatives of Arab and foreign countries, in addition to leaders from the Bishopric of General and Social Services and the Papal Office of Projects & Relations.” Pope Tawadros II News Desk | COC Papal Declarations | concerning Family Planning, Female Genital Mutilation (FGM), and Violence Against Women. Cairo, Egypt.

Today, the Coptic Orthodox Church released three declarations concerning females and family at the papal residence in St. Mark’s Cathedral, Abbasiyya – Cairo, in the presence of His Holiness and heads and representative of Egyptian and international agencies for the rights of women, families, and children, as well as several ambassadors and representatives of Arab and foreign countries, in addition to leaders from the Bishopric of General and Social Services and the Papal Office of Projects & Relations.

The Three Papal declarations are concerning:

I – Papal Declaration | The COC Position On Family Planning

“Do not desire a multitude of worthlessf[a] children, and do not rejoice in ungodly offspring. If they multiply, do not rejoice in them, unless the fear of the Lord is in them, Do not trust in their survival, or rely on their numbers; for one can be better than a thousand, and to die childless is better than to have ungodly children.

For through one intelligent person, a city can be filled with people, but through a clan of outlaws, it becomes desolate. Many such things my eye has seen, and my ear has heard things more striking than these!” [Sirach 16:15]

The Coptic Orthodox Church (COC) recognizes that necessity for practicing family planning as an essential national contribution in confronting the exploding population problem which threatens the the national economy, resources, and future of our beloved Egypt. The Church accepts family planning, in principle, in a way that does not interfere with the will of God, for God has established a natural regulation for the offspring of humankind.

In the context of this acceptance, the Church stipulates that the proper family planning method should neither be harmful to the mother’s health nor cause a fetus’s death (miscarriage).

“Beloved, I pray that you may prosper in all things and be in health, just as your soul prospers.” [3 John 1:2]

The Coptic Orthodox Church (COC) does not approve, at all, female genital mutilation “FGM,” but instead resists its practice as one of the worst harmful practices against women. The Coptic Church believes that FGM is a crime and a grave sin with no religious basis in Christianity.

There is no verse in the Bible in its Old and New Testaments urging FGM. The Church also considers that female genital mutilation “FGM” of girls is an evident violation of human rights. FGM also represents a significant threat to the health of women and girls, with severe and long-term physical, mental health, psychological and social consequences.
The Coptic Orthodox Church has defined its position against the crime of FGM and calls for an immediate end to this harmful practice. Eliminating FGM will positively impact the health, education, and economic progress of women and girls.

The Church encourages all Christian Religious Leaders and its congregation to embrace their daughters and children, to give them positive, loving care that keeps them away from destructive practices that may harm them today or their future life.

III – Papal Declaration | The COC Position regarding violence against women

The Coptic Orthodox Church (COC) supports women’s right to have a life free of all forms of violence. COC believes that all human beings are God’s creation.

They are all equal in dignity, as the Bible’s teachings equate men and women concerning God’s saying, “And the Lord God said, “It is not good that man should be alone; I will make him a helper comparable to him” [Gen 2: 18], and the word of a help meet for him total equality, “Nevertheless, neither is man independent of woman, nor woman independent of man, in the Lord.” [1 Cor 11:11].

Christianity stands against all forms of violence against women, either physical, verbal, or psychological. The Church rejects any harmful practices that are degrading to women and might cause them injustice or suffering.

That includes female genital mutilation (FGM), early and forced marriage, deprivation of education, discrimination and/or forfeiture of inheritance rights all forms of sexual harassment in public spaces and the workplaces and educational facilities, sexual assault, rape, and sexual exploitation (including trafficking of women and girls) and all forms of domestic violence and abuse.

Consequently, no man shall be entitled to inflict or engage in violence against women in any form “Husbands, love your wives, and be not bitter against them.” [Col 3:19]

Given that the spread of misconceptions, harmful cultural misinterpretations, and habits, especially among marginalized and underprivileged communities, is the root cause of violence. And Since clerics, religious preachers, and scholars have strong credibility and significant influence on Egyptian society, the Church is keen to develop their capacities and expand their knowledge to educate and sensitize communities to stand against all forms of violence against women.

The Church also provides comprehensive community awareness-raising programs touching on religious, legal, psychological, and social aspects and offers socio-economic empowerment programs tailored for women as an asset that enables them to enjoy their full societal rights and provide a decent living themselves and their families.

H.H. Pope Tawadros II, Pope of Alexandria, and Patriarch of the See of St Mark
H. G. Bishop Yolious, The Bishop and Director of Bishopric of Public, Ecumenical and Social Services.

Delivered to you by COPTICNN™ | Coptic News Network on 2021-04-15 from Vancouver, Canada


Nader Hanna is an Egyptian-born Canadian newspaper publisher and media entrepreneur since 1988. He is the founder and CEO of Coptic News Network Association—often called COPTICNN, a global Coptic media conglomerate. The digital Coptic Orthodox Christian newspaper has always done its job well, but, just as importantly, it was the mothership for so many other projects.